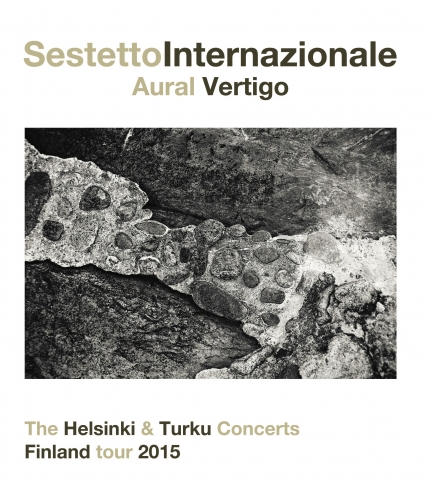 SESTETTO INTERNAZIONALE features some of the most original and sincere voices in contemporary improvised music scene.
The 2015 tremendous Finland tour Harri Sjöström set up made this band play in several venues and theatres.
The recordings of the two concerts at Kanneltalo theatre in Helsinki and at Sibelius Museum in Turku are on this album.

The combination of SESTETTO INTERNAZIONALE

instrumental voices (a really unusual line-up!!!) looks as designed to generate an original creative process that involves the listener to observe the multiple, sometime mirroring, interplay, the collective timbral palette, the different and simultaneous sound consistencies and the single, respective paths.

What’s done for commercial consideration in so-called Euro-pudding films, come about by happenstance from international minded European improvisers’ CDs. And the different in intent is one reason the latter is more satisfying than the former. Searching for funds from nationalist governments, film producers try to cast as many actors and technicians as they can from various countries in order to secure subsidies from the widest possible sources. Such a film is usually labeled a Euro-pudding. Since money for improvisers is much less, edging up from non-existent, musical coordinates are made for artistic reasons.

So it’s mere happenstance that when Berlin-based Finnish saxophonist Harri Sjöström organized Sesteotto International at least four countries are represented. Besides Sjöström accordionist Veli Kujala is also Finnish; violinist Allison Blunt is British-Kenyan; fellow soprano saxophonist Gianni Mimmo is Italian; while turntablist Ignaz Schick and pianist Achim Kaufmann are German. Perusing the instrumentation while listening to “Aural” and “Vetrtigo” the improvisations that make up this 77 minute set, you’ll note the sextet’s individuality. Rather than being brought together showcasing nationalist traditions, the sounds evolve by circumventing timbral expectations. If this was a film it would be one where to the comedian plays a dramatic role and the expected hero is a villain. Leisurely and microtonal the narratives are balanced through tension engendered when each pair of players with similar tones act in opposition. Throughout it’s impossible to tell which solo is from Sjöström and which from Mimmo; Kaufmann’s comping is up against Kujala’s tremolos; while Blunt’s spiccato thrusts and Schick’s crackling static advance juddering interruptions. Diluting the head of “Schick”, that when advanced by one saxophonist resembles a Steve Lacy line tinged with piano romanticism, stropping fiddle cuts and turntable crackles introduce combative rhythms. Very quickly the pulsations develop along parallel lines like competitive swimmers in an Olympic pool. Brooding reed snarls add to the unease, with only the piano line ambulatory. Kaufman’s focused narrative which includes key clips and soundboard clusters safeguard the theme even after one saxophonist comes up with a contrasting line half-way through. With contrapuntal expression causing the pressure to intensify via reed guffaws, sucks and burbles, only the intercession of quacking according pressure and harp-like piano glissandi preserves the mood.

More of the same at greater length, “Vertigo” manages to stay upright and connected, but its neo-romantic sequences from Blunt are exploded with percussive bell-ringing and buzzing from Schick’s sound archives that similarly threaten to dissolve into colorful discord. Aided by Kujala’s bellows-pushed interventions, Kaufmann maintain a chromatic status quo> The first of several false climaxes, one-third of the way through surprises with the realization that expected and identifiable instrumental tones have so far been few and far between, Most of the rest of the track is concerned with the efforts each player takes to break her or his part down to microtones, then using tropes as unique as crying split tones and keyboard pitter patter, stop the theme from dissolving by patching it with buzzing turntable crackles and a solid accordion vamp. When it comes, the finale is downplayed, since it confirms that individual voices are still prominent among the story-telling swirling mass.

Akin to an experimental art house program rather than any blockbuster – Euro-pudding or not – Aural Vetrtigo is challenging fare. As long as the expected in tone, narrative and color isn’t missed and the listener is willing to accept the CD on its own terms without conventional references, distinctive or maybe even pleasant results can be expected

All about jazz
Daniel Barbiero
https://www.allaboutjazz.com/aural-vertigo-sestetto-internazionale-amirani-recor…

The Sestetto Internazionale is a truly international group of European musicians, having been put together by Finnish soprano saxophonist Harri Sjöström for a September 2015 tour of Finland. In addition to Sjöström, the sextet includes fellow Finn accordionist Veli Kujala; the masterful Italian soprano saxophonist Gianni Mimmo; UK violinist Alison Blunt; and the Germans Achim Kaufmann and Ignaz Schick on piano and turntables, respectively. This exciting live recording captures the ensemble's concerts at Helsinki and Turku, each of which is represented by one long track.

The makeup of the group is unusual even for a free improvisation ensemble unbound by conventions governing instrumentation. To begin with, there's an intriguing, built-in redundancy of function and range. Three of the instruments—the violin and the two soprano saxophones—are of similar compass, while the piano and quarter tone accordion are both chording instruments. The quarter tone accordion in itself adds an unusual flavor, but when paired with either the tempered piano or the violin, it opens up the possibility of dissolving conventional harmonies into less-determinate pitch bands. The addition of turntables to this acoustic grouping further multiplies the potential for novel sound combinations.

Accordingly, the music here is a music of detail. Movement doesn't come by way of harmonic change but rather by way of shadings of timbre and pitch. The overlap in range of soprano saxophones and violin shapes much of the sound profile, setting up contrasts between reeds and strings or even between reeds, as when Sjöström uses a mute in contraposition to Mimmo's more open-voiced sound. But contrast is as much a matter of identity as it is of difference, as when the coincidence of pitch erupting in the middle of a soundblock or during a moment of unison playing will seem to summon a new instrument whose timbre is a composite of violin, saxophone and accordion.

In the end, it isn't the qualities of the instruments alone but rather the energy and finely-honed actions and interactions of the individual musicians that animate these pieces. The two saxophonists may play the same instrument but they do so quite differently; Sjöström constructs angular, hard-edged bursts that leap registers, while Mimmo favors longer lines built of carefully balanced, rounded phrases—he is a melodist as much as a colorist. Blunt, for her part, also pursues line but with an emphasis on the untempered side of the violin, whether playing microtonally-inflected chords and passages following their own logic, or deftly deploying glissandi against Kujala's quarter tones. Underneath it all, Kaufmann's percussive pianism contributes an element of urgency and taut drama.

Much of the time the music is analogous to an abstract painting whose color fields move around over the picture plane. The picture plane in this case being Schick's turntables—a scuffy, static-permeated background much like a canvas of rough weave.

The lineup is exquisite - delightful not only what comes to the very special instrumental combination, but also in terms of the potential of the players and the resulting tension - a constant oscillation between different sound events and moods- the large arcs being exceeded require intuitive understanding of form and dynamics which is highly developed by all parties involved."

Listening to Aural Vertigo, the Sestetto Internazionale album, is an experience that involves emotions, cultures, analysis, raptures, poetry, architecture, improvisational and expressive techniques, structural and silent anticipations. The musical moves originate from absolute reciprocal listening which generates timbral eclipses and reappearances together with silences and instrumental relationships.  All these things contribute to a multi-voice texture, yet singular in it's clarity.  ​

In Turku, Finland born saxophonist Harri Sjöström based in Berlin where he found his spiritual home for music that shun the usual definitions. Usually expression that meet are a.o. free, classic, avant - garde and electro - and composition depending on the line up. The essential is the improvisation that Sjöström describes as an immediate creation process, a precent time composing. („ PTC“). Sestetto Internazionale is a Finnish-Italian- German group of six musicians, in whose concert the listeners is taken from soundscape to the other of lyrical to dramatic. This is also the case with the Turku Sibelius Museum concert, where the sextet recorded in September 2015 for the second half of its new album Aural Vertigo. The opening is recorded during the same tour at the Kanneltalo concert hall in Helsinki. The group examines the themes loosely playfully in the sound of the sound that floats like the down of the dove in the autumn wind. With he’s soprano and sopranino saxophone Sjöström conducts and leads the sound textures seamlessly together in the band. Gianni Mimmo's soprano, Alison Blunt's violin, Achim Kaufmann's piano and Veli Kujala's accordion are developing a whole tune in their own registers. Ignaz Schick is also a special counter-force for the early flow: the turntable is present, among other things, in its astonishing sub-register. Aural Vertigo is a noteworthy documentary for a memoir of a staggering concert, as well as proof of the power of the real-time composer method - the listener can observe the music's freshness.