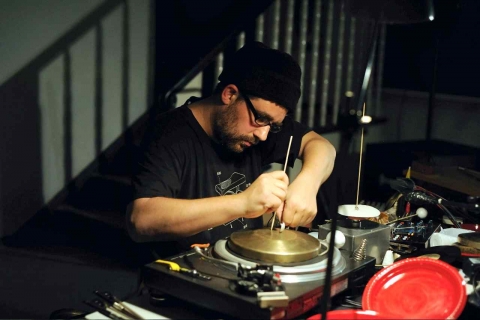 Ignaz Schick studied the saxophone and performed in free jazz and avant rock bands. At the same time he was getting obsessed with multitrack tape machines, record players and effect boxes and he started experimenting with many different instruments and sound making devices. After college he briefly studied at the Academy of Fine Arts in Munich and worked for several years as an assistent for the contemporary composer Josef Anton Riedl. Since the late 1995 he works and lives in Berlin where he became an active and integral force of the so-called “Berlin Nouvelle Vague” and the blossoming “real time music” scene. From the middle of the nineties onwards his interest and activities almost completely shifted towards live-electronics and after testing various instrumentations (hard- & software samplers, signal processing, contact mics, field recordings, ...) he developed his own and quite unique electro-acoustic set-up which he calls “rotating surfaces”. Various objects and materials (from wood, metal, plastic, paper or violin bows and cymbals) are played directly on the rotating metal plate of the turntable and the vibrations are simply amplified with a small condensator microphone. With this set-up he covers many different styles of contemporary experimental music - ranging from extreme reductionism via ambient, industrial, musique concrete, electronica to harsh noise. Besides his favorite setting - the direct duo-confrontation with the likes ofChris Abrahams, Phil Durrant, Martin Tétreault or Sabine Vogel - he is member and founder of many different ensembles like Perlonex, Snake Figures Arkestra,Phosphor, Blind Snakes, Decollage... He has collaborated with numerous international artists (most notably Don Cherry andCharlemagne Palestine) and toured and performed clubs and festivals all over Eastern and Western Europe, the USA, Russia and the Balkans. He has released many albums on labels like Zarek, Edition Zangi, edition x, Irrah, Potlatch, Bad Alchemy, Charhizma, Staalplaat, Nexsound, Non Visual Objects, Improvised Music From Japan or Absinth and he was part of radio broadcasts and productions for ORF-Kunstradio, ORF-Zeitton, BR2, DLR, DLF, WDR3, and DRS2. Furthermore he has been curating festivals of experimental music from the early 90s onwards (FAM, Erase & Reset, Tim Shifts).