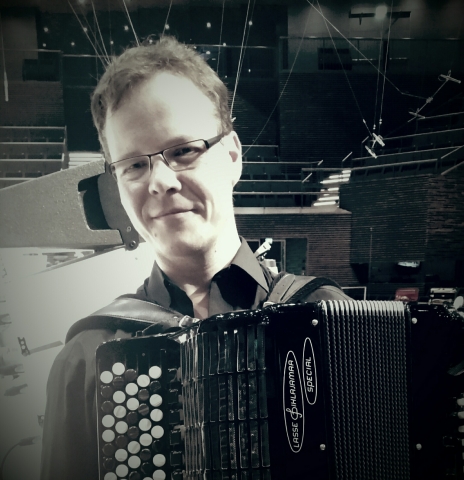 Veli Kujala (b. 1976) has gained a solid reputation of an outstanding interpreter of contemporary music on the accordion. In 2010 he completed his Doctor of Music –degree with distinction from the Sibelius-Academy. He is a prizewinner of many international competitions for soloists and for composition in the field of classical music. From the beginning of his career he has also been very active in the field of jazz and improvised music, with an open mind upon all genders of popular music, from progressive rock to tango, ethnic music to French chanson. Pipoka, Gourmet sextet and Kalle Kalima K-18 count among the most relevant bands he is involved in.

Kujala has performed as a soloist with ensembles including Avanti! Chamber Orchestra, Gävle Symphony Orchestra, Helsinki Philharmonic Orchestra, Insomnio, Lahti Symphony Orchestra, the Ostrobothnian Chamber Orchestra, the Tapiola Sinfonietta with conductors such as Stefan Asbury, Hannu Koivula, Hannu Lintu, Susanna Mälkki, Ari Rasilainen, Dmitri Slobodeniouk and John Storgårds. He has co-operated with a number of contemporary composers and has premiered accordion concertos by Pekka Pohjola, Markus Fagerudd and Olli Virtaperko. Moreover he has premiered concertos by Sampo Haapamäki, Joachim Schneider and Jukka Tiensuu for the quarter-tone accordion; a new instrument, which he developed together with Haapamäki.

Veli Kujala has performed in whole Europe, in major festivals and venues. He has also toured in the USA. Since 2005 Veli Kujala has been teacher of concert accordion and improvisation at the Sibelius-Academy.