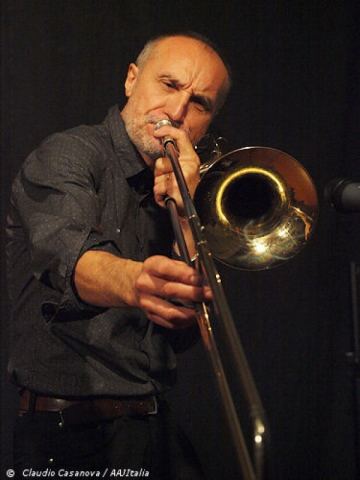 Angelo Contini plays the trombone since he was 12 in the marching band of his hometown.
Interested to jazz and free jazz taking place in Italy he collaborates with trumpet player Guiso Mazzon and percussionist Tony Rusconi and in the vey first 80s is part of Gruppo Contemporaneo, whose “Aspettando I Dinosauri” is considered an archetypal record for improvised music in Italy.

He has developed a deep knowledge of the possibility of the trombone and, being Roswell Rudd his first influence, got a very personal style that has often been considered very close to Paul Rutherford’s flexible one.