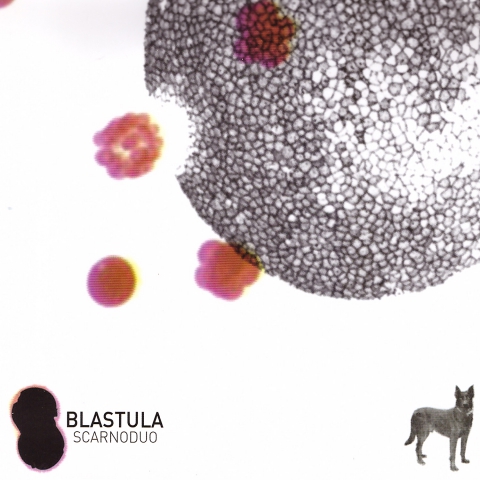 Accurate graphics and all texts booklet offer the opportunity of an ever new interpretation of “Scarnoduo”, like a great story that really deserves to be told again and again.

Faced with the prospect of listening to an entire CD of improvised voice-and-percussion duos, I was initially a bit put-off and placed Scarnoduo into the 'back-burner' stack. But the CD's lovely packaging, of all things, made me curious. Once I got it into my CD player, the sheer inventiveness, broad humor, and technical excellence of Blastula quickly won me over. Scarnoduo is certainly one of the year’s very best avant-garde releases, and another feather in the cap for the consistently great Amirani Records label. Though the liner notes assert that the duo freely inserts composed themes, fragments, and phrases at will, the music here is largely improvised. But, somehow, nothing on Scarnoduo feels like 'free jazz' or even 'non-idiomatic free improv' – there's something entirely else going on here, genre-wise, that I found hugely appealing. The duo’s seamless transitions between a seemingly endless multitude of styles, approaches, and sound-worlds is testament their startlingly complete musical skills, willingness to experiment, and their extensive on-stage experience combined with years of practice. You really feel the quality of the music-making right from the start, and it never lets up until the CD is over.

Blastula, the duo of vocalist Monica Demuru and percussionist Cristiano Calcagnile, is ostensibly concerned with the musical concept of ‘littleness’ which they manifest in a multitude of ways throughout “Scarnoduo.” Their performances are as naked, intimate, and personal as music can get – Demuru’s dramatic multi-lingual vocals seem almost confessional at times. Though I rarely understood what she was saying, the feeling that she’s sharing somewhat inscrutable in-jokes and closely-guarded secrets with the listener is quite palpable. There are times you can hear her breathing, and the little noises one’s mouth inevitably makes when it’s in motion. Similarly, Calcagnile frequently sacrifices his considerable percussive technique to pursue extended textural variations and sound-color possibilities using a standard-issue jazz drumkit. As a player, Calcagnile’s most obvious reference points are David King (of the Bad Plus) and Jim Black – he utilizes both similar drum tunings and the sort of rock-based, jazz-informed vocabulary that Black and King have made hugely popular in recent years. Throughout “Scarnoduo” he refers to a dizzying array of rhythmic motifs – jazz, rock, Brazilian, and African elements crop up frequently, as do marches, polkas, and Art Ensemble-like sonic experiments. Demuru is an incredibly diverse vocalist whose unstintingly beautiful singing also refers to a wide variety of styles – from the operatic, to jazz scat, folk, avant-garde, and rock / blues. During the course of a piece, she often changes the timbre of her voice, as a monologist would during a dramatic reading involving multiple characters. In fact, Blastula frequently wanders into theatrical and poetic realms to get their musical points across. So, in their quest for ‘littleness,’ Demuru and Calcagnile may have succeeded more fully in uncovering their own ‘vastness.’

As if the music weren't enough, the CD comes packaged in a lushly-illustrated glossy paper envelope with eight little illustrated cards. Quite fetching, indeed!

All About Jazz
Mark Corroto

Part poetry and part performance art, the duo of percussionist Cristiano Calcagnile and vocalist Monica Demuru, known as Blastula, is sheer delightfulness. Demuru, the Italian equivalent to America's Shelley Hirsch, delivers the spoken with the sung in multiple flavors. Backed by drummer/percussionist Calcagnile, the experience is theatrical, and the delivery is varied.

The songs draw from varying texts, spoken pieces, poetry and wordless sounds. Demuru ranges from childlike chatter to the craggy, croaking of her gruff voice. She can sing like an angel or swear like the devil. The vocals are backed by various percussion works from heavy drumming to light bells. The spoken and sung Italian draw from folk works to popular culture, yielding surprising results. This multifarious recording is pure euphoria and a fantastic discovery.

As you know, I am not a fan of vocals in jazz, but once in a while a record pops up that proves me wrong. This is an example in case (and a strong one), with Cristiano Calcagnile on drums and percussion, and Monica Demuru on voice, and occasionally also mouth harmonica and glockenspiel. The duo goes deep, very deep, intense in the interaction, physically giving themselves fully, but their reach is wide too: from childlike singing to avant-garde grotesque, with poetry, folk, world and everything in between. Knowing my aversion of the genre, I can tell you that it is absolutely stunning at times, with the following highlights : "Nanneddu Meu", a powerful and highly rhythmic dialogue, "La Porta, Marnie!", a serene and meditative breeze, "Mangia La Tua Paura", a children's song evolving into nightmare and back, "Sa Calarina E Mosche Sugli Occhi", an almost classical piece turning into avant-garde and farm animals sounds, a kind of reverse evolution. The pieces are interspersed with short fun melodies. You could argue that all the different angles of attack diminish the album's coherence, you could also argue that the music reflects life itself, in all its contradictory approaches, full of drama and opposing sentiments.

The album comes with art work of the same high level, little cards with the Italian poetry or lyrics. Knowledge of the language may help to fully appreciate the performance, but it's not a necessity to enjoy it.

A must for fans of the genre. Recommended to everyone else.