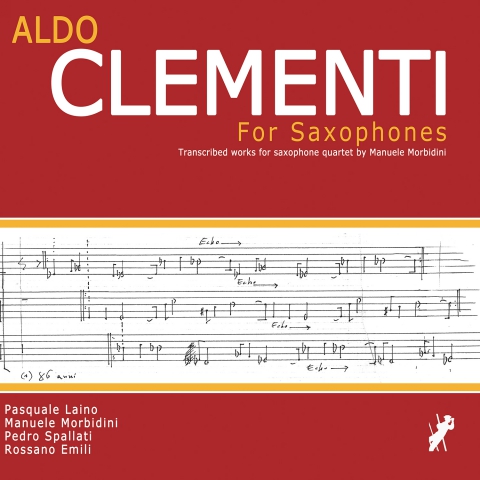 Aldo Clementi's belief is that "Music as art must simply accomplish the humble task of pursuing its own end", but his vast catalogue demonstrates an extraordinary and creative vitality.

This freshness, in David Osmond-Smith's words, far from spiraling down into silence, testifies that "The steady flow of pieces from his pen shows the music ability to re-birth, phoenix-like, from the ashes".

Clementi's sonic space, made by highly precious craftsmanship and conceptual strength, undoubtedly represents one of the most original and fascinating results in the late twentieth century music history.

A student of Alfredo Sangiorgi and Goffredo Petrassi , he began to build his own identity as a composer starting from post-Webern serialism coordinates, by elaborating the influence of both attending Darmstadt and acquiring technical skills thanks to the relationship with Bruno Maderna.

Deeply influenced by contemporary painting (especially by the "informal" art of Fautrier, Tàpies, Tobey and Burri, but also by Perilli's and Dorazio's works), and by the relationship with John Cage (with whom he shared the passion for chess), Clementi has achieved, since the early Sixties, his own aesthetic, gradually shifting from the structuralist categories to a personal dimension and style. These transcriptions for saxophone quartet are simply intriguing.

A timbral conversion of Clementi's work that generates unsuspected freshness and new depth to the music.

As a chamber music ensemble the saxophone quartet has a surprisingly long pedigree. The first work for it was written in 1857, less than twenty years after Adolphe Sax invented it, a Saxophone Quartette Club was founded in New York in 1879, and by 1896 a California Saxophone Quartet was on tour. While the modern saxophone quartet is now most likely to be associated with the jazz tradition, the standard ensemble of soprano, alto, tenor and baritone saxophones was originally developed to play music in the Western art music tradition. Thus in a sense this recording represents a return to roots of sorts. Seven of the nine pieces by Italian composer Aldo Clementi collected here are scored for the standard saxophone quartet, with Pasquale Laino, Manuele Morbidini, Pedo Spallati and Rossano Emili on soprano, alto, tenor and baritone respectively. On the remaining two tracks Laino switches to alto and Emili to tenor. Like many of the earliest works in the saxophone quartet repertoire, these are transcriptions of compositions originally written for other instruments. Clementi (1925-2011) was an Italian postwar avant-garde composer. Along with many other European postwar composers he took the work of Webern as a starting point, and developed his art through attendance at the Darmstadt summer sessions and work at RAI’s Studio di Fonologia Musicale. A personal acquaintance with Bruno Maderna was also decisive for him, as was the influence of the spontaneous gesturalism of the painters associated with Art Informel, Europe’s counterpart of American Abstract Expressionism. Morbidini, Clementi’s student, produced the transcriptions recorded here with Clementi’s input, although the latter sadly did not live to hear the completed project. The pieces Morbidini chose are late works from the period 1997-2005. All of them seem to embody, to a greater or lesser extent, Clementi’s characteristic counterpoint of cyclical canons made up of shorter phrases. The very first piece, the relatively brief Canone, exemplifies this kind of construction. Four independent voices weave their lines into a polyphony deeply flavored by an astringent Modernist dissonance. Similar harmonic vocabularies and phrase structures imbue Momento, which hints at times of a minor modality, and Von Himmel Hoch, whose melodic fragments trace a slowly rising and falling course. Blues 1 and Blues 2, originally composed for piano, are kaleidoscopic settings of shards of melodies taken from various pieces by Thelonious Monk. Although the works presented here weren’t originally written for saxophone quartet, the format is remarkable for bringing out Clementi’s contrapuntalism with great clarity. For Saxophones thus serves as an intriguing introduction to this composer.