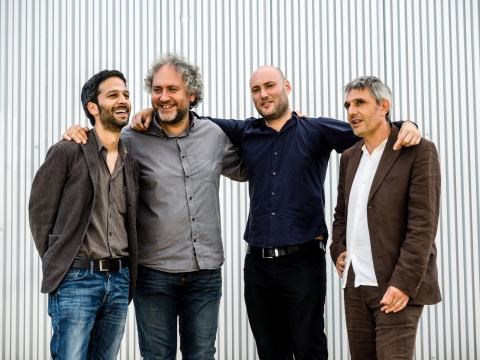 Pasquale Laino
Graduated with Honors in Perugia in 1991, he played on regular basis with the RAI Symphony Orchestra of Rome, the Orchestra of the Teatro dell'Opera di Roma, the Rome Symphony Orchestra, the Sentieri Selvaggi ensemble. Co-founder of the band Klezroym and the Arundo Donax saxophone quartet, he extensively tours in Italy and abroad, involved in concerts and recording sessions.
He also composes for cinema and television. Both as performer and composer he worked with Franco Piersanti, Paolo Buonvino, Ascanio Celestini, Ulderico Pesce, Carlo Cecchi, Mango, Carmen Consoli.

Manuele Morbidini
Saxophonist, composer, improviser, he completed his musical studies at the Conservatory of Perugia, while studying philosophy at the University of Siena and musicology at the University of Bologna. His meetings with Roscoe Mitchell and composer Aldo Clementi have been extremely important in developing a personal approach to composition and performance.
Mainly interested in inter-connections among jazz, contemporary classical music and improvisation, he performed in several festivals as Umbria jazz, Crossroads, Vicenza Jazz, Sagra Musicale Umbra and has composed for theatre and multi-media performances.
Beyond leading  his own bands, he’s a member of Dan Kinzelman's Ghost and Società Vesna collective.

Rossano Emili
Saxophonist, arranger, composer, considered one of the leading specialists in baritone sax, he has been active since the Nineties, both in classical contemporay music - with the RAI Symphony Orchestra, the Accademia Filarmonica Romana, Louis Andriessen, Sentieri Selvaggi  and Artisanant Furiex ensembles – and in the jazz scene - working, among others, with Kenny Wheeler, Tony Scott, Willem Breuker, Lee Konitz, Bob Brookmeyer, the Lydian Sound Orchestra and many Italian groups. In 2002 he played with Paul Motian’s Electric Be Bop Band in a tribute to the "Town Hall Concert" by Thelonious Monk.  He is saxophone teacher at the Conservatory "A. Buzzola", in Adria, Italy and “Limine”, released in 2014, is his first album as a leader.