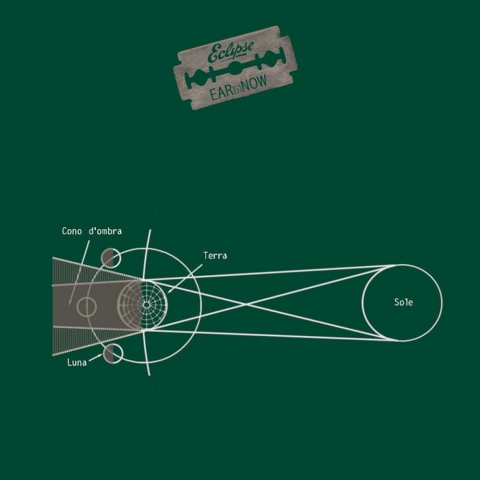 Eclipse is a wind, opening and moving the pages of a book, hidden to our attention because too important, too inexorable.

It’s a music that soon leaves its first aesthetical dimension to begin to dig up, as a drop, as a bedded narration,a choir.

A same story we pass through, we  listen as told in different places, with different shadings, from different sides.

As if the possibility to come across a time, through scenes that freeze themselves in a sort of tableau vivant, animated by dense symbols.

Great and overhelming, ritual and evocative, the Eclpise still retains the power of admonition, of calling to re-consider our single perspectives as parts of a pulsing complexity, we can’t properly describe.

EAR&NOW delivers a perfected work where is easier to feel the harshness of lives moving there, like sharpnesses of a tide, darkened by a lunar Eclipse

Eclipse is the each one’s other side

Amirani Records, an impressively eclectic and adventurous Italian indie label, scores again with “Eclipse” by Ear & Now, a co-operative musical venture featuring multi-instrumentalists Alberto Morelli, Paolo Cantu, and Xabier Iriondo backed by a shifting cast of players – many of whom appear on only a track or two. This CD is all over the place, stylistically, though the focus is on non-jazz improvisation, altered ethnic music, experimental soundmaking, and a subtle atmosphere that effortlessly shifts from the malevolent and creepy to the puckishly humorous. Many of these rather brief pieces could work quite well as a soundtrack to an experimental film, which is not to say that this is background music – far from it, in fact. Despite the 'soundscape' nature of much of “Eclipse”, the goofily juxtaposed cultural reference points and strange combinations of Western and non-Western (often untempered) instruments with primitive electronics is guaranteed to disorient and startle even the most casual listener. This music sucks you in. You can't not listen.

The majority of the tracks on “Eclipse” are somewhat amorphous. De-emphasizing rhythm in favor of texture and atmosphere, many simply hang there suspended in the air. Cantu, Iriondo, and Morelli are fascinated by bowed metal sounds, odd or obscure ethnic instruments, or common instruments played in unusual ways. At various points, you will hear Tuvan throat singing, the sounds of coins rolling across drumheads, multiple prepared guitars, and the recorded and electronically treated voice of Rosa Corn, a traditional singer from Valle dei Mocheni, Trento, Italy. The most impressive thing about all of this is how well it's all been integrated into a coherent musical statement.

Yet, when the band kicks out the jams, as on the title track, it does so with a vengeance. This ever-shifting, insistently rhythmic piece sounds like an outtake from an early 70s Soft Machine session, or perhaps even Miles Davis' 'Get Up With It.' 'Third Ear Dance' is both less funky and less harshly electronic, but no less bracing and features a particularly beautiful multi-tracked oboe solo by Roberto Mazza. The very brief 'Terra' is similar, only with saxophonist Gianni Mimmo and trombonist Federico Cumar waxing eloquently over percolating tablas. Personally, these three tracks are my favorites, but the whole disc literally brims with interesting ideas and an active, human curiosity that I find particularly refreshing. “Eclipse” is not for everyone, but will surely please those already accustomed to experimental sounds à la Aktuala, Don Cherry, the Residents, and Fred Frith. If you know what the 'NWW List' is, you'll definitely want to check this disc out.

All About Jazz
Vincenzo Roggero

The great thing about music is that its inherent possibilities for novelty are absolutely endless. Yet rare are those who manage to create something entirely new, perplexing the audience, wrongfooting the listener, while maintaining an element of the listenable and the enjoyable. This album clearly falls within that category, and is beyond classification in terms of genre or style, let's call it avant-garde for lack of a better word. EAReNOW is an Italian "band", sounding more like a project, with varying line-ups on this record, with Alberto Morelli on hammond organ, rhodes piano, bendir, khan, harmonium, electric bass, acoustic guitar, rolling coins on percussion, treatments, piffero, whistle, mouth organ, bow vibraphone, tibetan bells, mouth harp, bow dotara with sympathetic strings, Paolo Cantù on electric guitar, clarinet, whistle, and farfisa organ, Xabier Iriondo on electric guitar, treatments, mahai metak, autoharp, and taisho koto. These three men seem to form the nucleus of the group. They are assisted by another list of musicians, with especially soprano saxophonist Gianni Mimmo as possibly the best known guest, next to Federico Cumar on trombone, Roberto Mazza on oboe, Federico Sanesi on tabla, Cristian Calcagnile on drums, Stefano Stefani on voice. The instrumentation already indicates that you're in for something special, with unusual combinations of old and new, of the familiar with the uncanny, keeping a light touch of opening new musical horizons.

One of the most noteworthy moments of the album is the integration of a field recording from 1969 of a song by then 75-year old Rosa Corn, one of the last traditional singers of the Valle dei Moccheni in Trento, Italy.

Although the different tracks vary quite substantially in style, ranging from folk, far eastern meditative influences, soundtrack elements, electronics, avant-garde jazz to the days of the early Soft Machine, yet it all fits well in the overall concept, and adding a sound sample of the music will not do it justice: it's the variation, the broad scope and focused approach of a combined intimacy, spirituality, weirdness, lyricism and musical drive, that makes the overall effect rather unique. Impressive result.