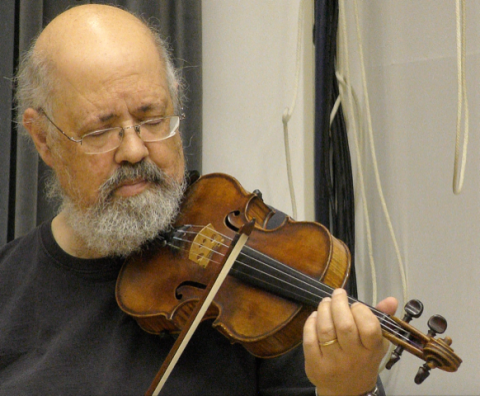 One of the finest violinists working in improvised music today.

He has been developing the role of the violin in improvisation and performance since 1970. He studied with Nadia Boulanger, Isolde Menges, and Juan Orrego-Salas, and in Paris, Durham, London and Bloomington.
His concerns include John Berger’s ‘Ways of Seeing’, Structuralism (Paris 1968), the music of Uganda, Cage, Xenakis (Stochastic process), and he has worked with many musicians such as Barry Guy, Paul Rutherford (Iskra 1903), Evan Parker and Derek Bailey finding an environment that owes its origins in Jazz.

He can be heard on well over 100 LPs and CDs in many different combinations, and performances have included mixed media, painting, dance, the LJCO, conductions with the London Improvisers Orchestra, work with Paul Lytton (eg on ECM), work on Bead Records, and with many amazing younger improvisers currently.