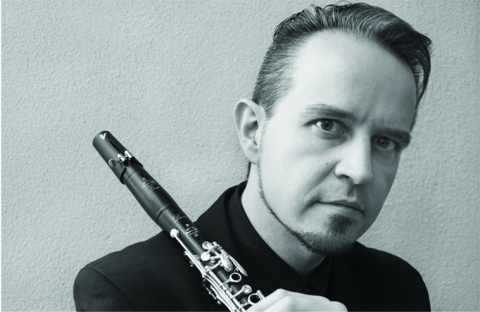 Michele Marelli, who holds a major in clarinet with highest honors "Summa cum laude" from the Conservatory of Alessandria under the guidance of Prof. Giacomo Soave, and a degree in Modern Literature from the University of Turin with a thesis on Karlheinz Stockhausen, furthered his studies in England with Alan Hacker, in Germany with Suzanne Stephens and in France with Alain Damiens, and studied composition and electronic music in Torino and Milano. Internationally acclaimed as a virtuoso of the basset horn and as one of the best contemporary music soloists of his generation, he is also active as a painter and as a composer. On October 2014 he has been awarded the prestigious Rubinstein Prize "Una vita nella musica giovani" at the Gran Teatro La Fenice in Venice together with the composer Salvatore Sciarrino.

As an 18-year-old he met Karlheinz Stockhausen, establishing a profound artistic relationship that lasted for more than a decade during which, chosen by the Maestro himself as soloist of his Ensemble, Marelli played World Premières under his instruction and guidance and recorded 3CDsfor the Stockhausen Complete Edition. Stockhausen himself led Marelli to devote himself to the basset horn.

A six- time winner of the Prize of the Stockhausen Stiftung für Musik,  and other prestigious international prizes, he has worked with some of the leading composers of our times, giving world premieres of their compositions mostly dedicated to him, such as Karlheinz Stockhausen, György Kurtàg, Marco Stroppa, Helmut Lachenman, Ivan Fedele, Franco Donatoni, Kaija Saariaho, Rebecca Saunders, Fabio Nieder, Sylvano Bussotti, Alberto Colla, Luca Francesconi and many others