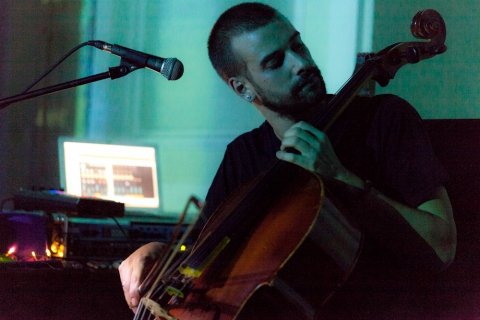 Born in 1984 he's playing cello ever since he was six years old.
Still a child he started looking for all kind of instruments, conventional or not.

Being fascinated by construction today he's finally able to put together a part of his own equipment that he plays with contact microphones, tools and laptop.
He plays them all together with electric cello in Airchamber 3 band.
Interested in sincerity and interiority without loosing sight on pure "fun", he refuses to improvise with an approach based on a mere demonstration of virtuosism.
His musical experiences evolves around eclectism and have brought him crossing different musical and artistical styles.
Formerly active in Instrumental Theatre Ensemble of his hometown's conservatory , he also played bass in a reggae combo, he takes part to Orchestra Laboratorio directed by Claudio Lugo and also played for more conventional orchestras and theatres.

He's been involved with the recording of a cd by Luigi Bonafede and Pietro Tonolo coming out on New York's Oblique Sound records and he has also recorded with drummer Francesco Cusa and saxophone player Gianni Mimmo for Amirani records.
Cello remains his main instrument, and after winning a period of studies on "cello performance" at the University of Georgia, he's going to graduate at the Conservatory of Milano by precious teaching of M. Scano.