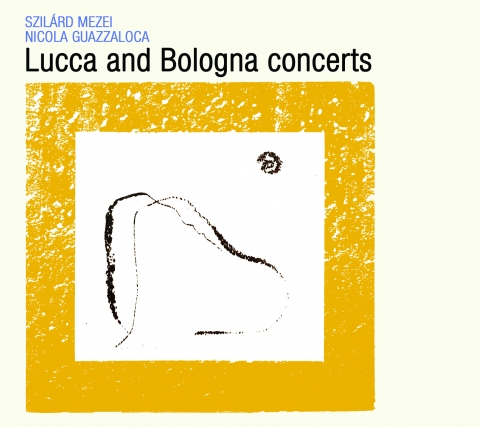 The collaboration between Szilard and Nicola starts in 2009, when they met in Hungary and Serbia in the middle of their respective tours.

The light overflowing this record shows how those sparkles were the generator force of their brilliant interplay, their crystal clear formal attitude in a perfect blend of energy and contemplation.

The two live performances at Counterpoint Festival and at Angelica Festival are really intense.
The duo plays convoluted lines and contrapuntal beauties in a transparent scenario often converging on a complex architecture, wisely hesitating on the core of their passionate empathy.

zilárd Mezei is so often noted for his compositions and arrangements for many sized ensembles that like Franz Liszt as pianist, his accomplishments as a violist are often overlooked. Yet in the right circumstances the Serbian musician can improvise as memorably as he can compose his seminal works. Choice of collaborators is crucial however. The violist appears perfectly in tune – in a semi-atonal fashion – with the aleatory pianism of Bologna native Nicola Guazzaloca, who has worked with other notable string players like bassist Barre Phillips and cellist Tristan Honsinger. Less striking is Mezei duet with Danish acoustic guitarist Jon Hemmersam, although the plectrumist arrives with the pedigree of having played with musicians as different as saxophonist David Liebman and percussionist Evelyn Glennie.

Arbitrarily it appears as the strumming strategy of Hemmersam orients not only his own playing but that of Mezei towards instant compositions that list towards the airy string band tradition rather than the aggressive and spikier runs associated with Jazz-like sounds. Like a prisoner with one leg manacled, when Mezei attempts to break away from this standardization with bent notes and sawing vibrations, as on the climatic “Floating Orange Suite, Part 3”, the guitarist’s plinking pulls him earthbound. It’s a mismatch of metronomic and animation. The situation rights itself in some manner in the second part of the concert when the violist switches to double bass. Propelling thickened, low pulsed slaps on “Deep” and “Floating”, Mezei’s challenge works Hemmersam up to staccato plucks and a touch of slurred fingering. Despite more efforts from both sides it appears as if the equivalent of broadcasting different programs from a congruent site ended with mixed messages here.

Moving from Novi Sad to the two Italian cities, Mezei’s interaction with Guazzaloca is more sympathetic because the pianist is first and foremost an improviser. It’s noticeable as early as “First Improvisation in Lucca”, where the inner piano pluck and viola spiccato lines move forward in caustic concordance before a celesta-pitched solo on the pianist’s part and kinetic buzzes from the violist establish their instruments’ separate identities. From that point on the Lucca tracks are a polyphonic morass of exploding and reactive timbres, with the key clipping and note cluster expansions from Guazzaloca evenly matched by harsh sweeps, slides and shimmies from Mezei. Including some mainstream allusions to so-called classical music and Jazz to keep the four-part suite upright, the two work up to a crescendo of splintered fiddle pulses and oscillating keyboard pressure. Reaching a climax with “Fourth Improvisation in Lucca” the summation finds both smacking the wooden parts of their instruments for additional energy. With notes almost literally bouncing off one another, heightened tension and subsequent relief add to the build up. Eventually as Guazzaloca rubs disassociated objects for added friction, Mezei preserves the theme with narrow whistling thrusts. The result is a squirming mass from which the only separation noticeable is equal fulfillment.

Recorded in the pianist’s home town almost one year later, and almost three after Floating Orange, the four-part Bologna improvisation is consistently more elevated. With string stops and slides, plus rhythmic chops and stops worked into the mix, connectivity is as prominent as virtuosity throughout. As the solo and accompanying roles shift from one to another, a series of high-wire-act-like thrills and chills comes into play. As Mezei stretches his timbres into multi-string coloration on “Second Improvisation in Bologna” for instance, Guazzaloca crafts comprehensive accompaniment, producing waterfalls of splattering notes for additional thrills. By the finale, after having demonstrated that they can together examine every timnbral cluster as fast and furious and slow and sensuously as they desire, the sweeping piano clusters and speedy viola shuffles meld into a rollicking display of cohesive power and elated partnership

Mezei’s instrumental smarts are evoked on these CDs. But their renown as improvisational milestones is determined by his choice of duo partners.

A brilliant recording by Hungarian viola player, Szilard Mezei and Italian piano player, Nicola Guazzaloca. These master musicians pair up for recordings at 2 concerts and give performances of improvisational bliss. From slow and quiet almost silence, to loud bursts of volatile sound, Szilard bows, scratches and engulfs his viola, nursing and cursing a rich array of sounds, even bits and hints of Hungarian folk tunes. Nicaola, plucks and strums the inside of the piano then moves to eloquent chords, patterns, trills and other innovations on the piano keyboard. The interplay between them is thrilling to listen to, hearing the two shadow and mimic each other, then explore around the other’s sounds. Serious for sure, but fun. Lots of fun from these improvisers.

“Lucca And Bologna Concerts” – it’s another one fine and interesting avant-garde jazz album released this year by “Amirani Records”. Album had been played by two outstanding jazz musicians – pianist Nicola Guazzaloca and violinist Szilárd Mezei. Nicole Guazzaloca is creative and talented pianist which playing style consists of precisely and virtuosic playing techniques, the high variety of music styles and different expressions combinations, innovative and original improvisations and other elements. The pianist had been released many albums with other jazz improvisers such as Francesco Guerri, Thollem McDonas, Hannah Marchall and others. Her previous albums “Techniche Archaiche” and “Techniche Archaiche/Live at Angelica” were also released at “Amirani Records” and had original and dynamic sound. Szilard Mezei is Hungarian free jazz violinist. He also is the leader of various bands and ensembles such as “Szilard Mezei Trio”, “Szilard Mezei Ensemble”, “Szilard Mezei International Ensemble”, “Szilard Mezei Vocal Ensemble” and may others. Szilard Mezei has unique and original playing style and sound. His improvisations are full of unpredictable musical experiments and decisions, innovative playing techniques, virtuosic and precisely playing style. Improvisations played by these two musicians have interesting and natural sound.

Album has 8 compositions. All compositions are based on free jazz elements. Dynamic and contrastic collective improvisations are full of virtuosic and masterful played solos and duos by both musicians. The musicians put together different music elements, expressions and styles and combine it to the one composition. They do that very natural and organically, so this create original and interesting sound of this music. High diversity of playing techniques, innovative musical experiments, special sound effects and modern musical expressions also are the main elements of these compositions, This music is always changing – after rigorous and sharp episodes there comes virtuosic and very fast solos which also suddenly change in silent and calm episodes. The sharp and colorful harmony and dynamic rhythmic are also very important part of these compositions. It makes the compositions sound more effective and interesting. Expressive and marvelous playing, high variety of playing styles and musical decisions and other elements make innovative and organic sound of this album.

Although considerably more rare than the violin-piano duo, the viola-piano duo traces at least as far back as Mendelssohn’s 1824 sonata for viola and piano. Max Reger and Paul Hindemith—the latter a violist himself—added substantially to the repertoire in the last century, as did Darius Milhaud, Hans Werner Henze, George Rochberg and others. Now, Serbian-Hungarian violist Szilárd Mezei and Bolognese pianist Nicola Guazzaloca bring the viola-piano duo into the twenty-first century, albeit in a manner that departs substantially from the conventional chamber sonata.

Unlike classical sonatas, these eight improvisations, four each from concerts in Lucca and Bologna, develop through variations of timbre, dynamics and density rather than through melodic themes and harmonic modulation. But although much of the playing negates the formal vocabulary and syntax of the classical viola-piano duo, something of the latter’s ability to capture an emotional arc remains. The music can be tempestuous, placid, abstract or even plainly melodic, as when Mezei delivers a modal soliloquy during the third improvisation from Lucca. Both improvisers draw on an expanded palette of instrumental colors, setting conventional and unconventional techniques in a mutually illuminating dialogue with each other. Guazzaloca moves agilely from the keyboard to playing directly on the strings inside the piano; his use of objects in association with the piano emphasizes the instrument’s often-obscured status as a percussion instrument. Mezei, too, plays percussively, using a full-bodied attack with the bow as well as a forceful pizzicato; his engagement with hypermodern performance techniques doesn’t eclipse an expressive immediacy consonant with his involvement with Hungarian folk traditions.