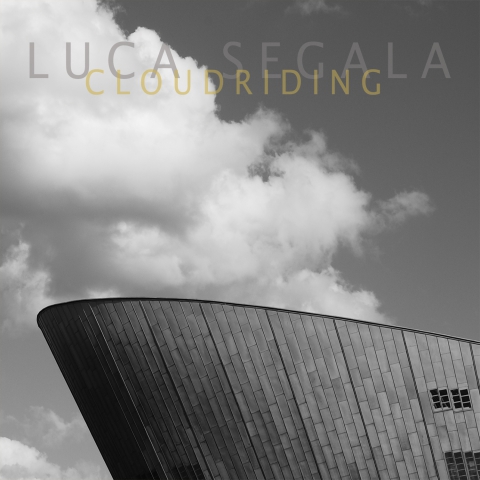 Luca Segala's compositions are always a step beyond possible definitions.

[...] Suppose you are imprisoned in cangue and lock,
hands and feet bound by fetters and chains.
Think on the power of that Perceiver of Sounds
and they will fall off, leaving you free! [...]

All About Jazz
Luca Segala

All About Jazz
David Wayne

Italy continues to be a source a wonderfully original and thoroughly modern jazz. Maybe there's something in the water over there but, for whatever reason, everytime I check my e-mail or snail mail there seems to be something wonderful and Italian in it. I keep hoping for a pair of handmade shoes, a nice shirt, or a tailored suit, but the music is more than enough to keep me happy.

Saxophonist Luca Segala's seventh album as a leader, titled Cloudriding is the first I've ever heard. It's a fine and quite memorable effort that, for some reason, reminds me of Henry Cow's first couple of albums despite the fact that Segala self-identifies as a "jazz saxophonist" everywhere I look. The oddball rock strains of Segala's music originate equally from Segala's imaginative compositions and from the work of guitarist Riccardo Bianchi and voilist Paolo Botti. Bianchi is an energetic player with a percussive approach whose string-popping solos always threaten to veer out of bounds. Botti, on the other hand, seems to have one foot planted firmly in the folk and ethnic music of his homeland. Drummer Ferdinando Farao is equally at ease playing complex rock, hard bop, or aleatoric music. He gets to do it all throughout Cloudriding, sometimes within one piece! On alto and soprano, Segala has a pleasantly full-throated, broad sound. Occasionally he utilizes vibrato, and the result is somewhat reminiscent of Albert Ayler, though not really Gospel-derived.

His band's musical flexibility and poly-stylistic tendencies dovetail nicely with Segala's original compositions which organically juxtapose passages of free improvisation with post-bop, tango and a variety of other forms; some familiar, some not. "Bolero" starts off, and returns to, its immediately recognizable, and quite pleasant, rhythms and chord changes after Segala and Botti engage in edgy free-form conversation. Interestingly, Bianchi gets to solo over the song's original form after the free section, and before the piece breaks down into a mournful rubato. Somehow, the piece sounds more complete and conceptually whole as a result.

Segala uses this sort of structure repeatedly throughout Cloudriding. "Alberico" startles with a few bars of punkish rock before breaking down into a 5-way conversation which ends as Segala re-introduces the theme at a slower tempo. Segala's soprano weaves its way through the stuttering, halting riffage on "La Balleta Lenta" (The Slow Ballet), straying further afield and building intensity with each iteration. The band's appreciation for native ethnic sounds is in full display on "La Féte," a complex, multi- sectioned piece which compares nicely to the work of countrymen Slivovitz and adventurous Eastern European groups such as Grencso Kollektiva.

Adventurous and odd without being offputting or self-consciously eclectic, Cloudriding is an exceptionally well-played set of distinctive compositions that get into all sorts of unusual musical places.

music _ all compositions by Luca Segala