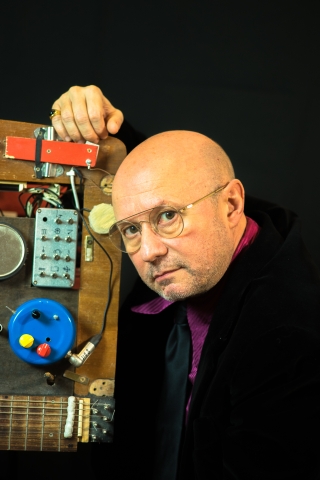 Luca Collivasone is the inventor of the CACOPHONATOR, the concrete sound generator. Fascinated ever since he was a young punk by experimental and industrial music, expecially that made out of raw material and junk, in 2013 started his artcraft project consisting in modyfing an old 1940 SINGER sewing machine and converting it to a concrete sound generator, obviously futurist composer Luigi Russolo and his intonarumori was of great inspiration.

The CACOPHONATOR essentially generate concrete sounds out of every sort of material (springs, crank wheels, rubber bands etc etc) each sound is picked up by transducer mics then routed to a mixer, the mixed sound could be:filtered by pedal effects, looped, captured as a sample and then reorganized live....immagination is the limit. The lack of precision in intonation and the barely unpredictable type of sounds and notes force the composer to imagine different scenarios and follow different routes "on the fly".

“I expand tiny sounds, for ex. the sound of a needle against a magnet, and make them fill an entire room or, on the opposite side, I compress huge sounds till they are barely audible but still there, this idea is a transposition of some astrophysics theories, compression and expansion. I like to investigate all the opposite worlds, the micro and the macroscopic one in term of sound.

I Need Limitations- I need to have limitations to force my imagination to re-invent and arrange the situation. I want to look at thing from a different point of view and this happens everytime that my imagination start his work without beeing guided and influenced by too much gear.

I like the idea to produce as much as I can with the minimum available.This concept it’s obviuosly the exact opposite of today living: we got all sort of thing ready at hands and (but) probably we don’t know the exact use of all that stuff or simply we doesn’t use i at 100% of it’s potential.
We are really guided by all this stuff and our imagination slowly fall asleep.

That is the reason why I want to have limited material to work on, my little orchestra got a few pieces of parphernalia, rubberbands, springs, crank wheels , and some sort of “intonarumori” created by me, I also have a very simple electronic device that is only able to produce random tones, that’s enough for me, my other instrument is my imagination, I force myself to rearrange every noise and sound in order to create music.”