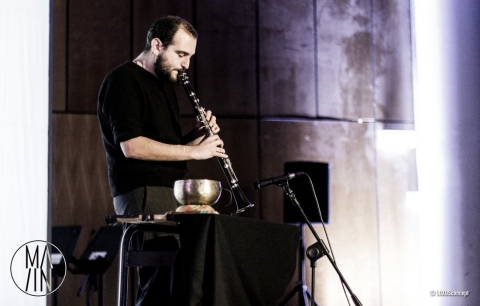 Francesco Pellegrino is an electroacoustic musician, composer and multimedia artist.

The subject of sound is the fulcrum of his work: sought through the complexity of digital generative  structures or in the immersion of instrumental technique or again with the creation of multimedia  installations, sound and its nature are the constant generators of new meaning in its poetic universe.

As an artist his installations are exhibited in important national and international contexts including:
Inner Waving with 8 tubs of vibrating water, with lights projecting the sound shapes in the wall Fonoteca National, Mexico D.F. / STOFF, Stockholm Fringe Festival / Sands of Time, Florence /  Combat Prize, Livorno.

Vivente wins the call of the "Riva Project" by creating an installation with 128 bamboo pipes transformed into organ pipes, which create a crossable and immersive sound environment at the MAD - Murate Art District in Florence.

Nidi, three sound structures of different materials and in collaboration with the illustrator Anita  Barghigiani, participates in the Florence of Children.

Rain Drops is a public art installation made in Liuyin’s country, at Chongqing in China, during the  residence won for ToscanaInContemporanea.