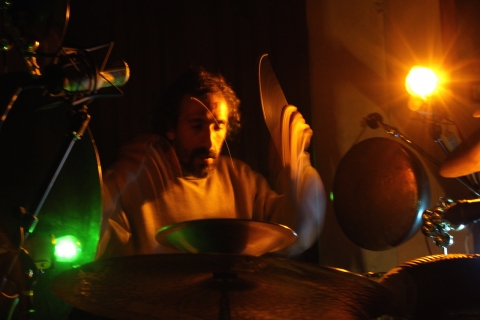 An incessant researcher, Milo Tamez artistic envision urges for a renewed listening sensitivity on drum music, he focuses on the percussiveness phenomena in nature and its effects in creative invention on human being. For the last seven years he has been concentrated in the percussionist body-mind interwinding and in the eukinetic and proprioceptive body-instrument interrelationship, following the neuroscience premise conception that ̈the body has a mind of its own... ̈ looking deeply into the origins of percussive fact for new responses, gesture grace and the ̈what is in the spirit that speaks ̈ through the creative drummer instant composition experience. He is continuously exploring into the elements of compositional wide complexities and abstract dimensions of pure rhythm and sound in Nature; the physicality of time in space, and the transductive phenomena of sound, light and touch, in human perception system as a foundation for expression and evolution. His creative instrumental work evolves from the textural embodiment of organic structural sound organization in Nature, as it nourishes his constructive imagination and inventiveness.

embracing and composed on eight great drum masters (Max Roach, F. Don Moye, Rashied Ali, Beaver Harris, Milford Graves, Sunny Murray, R. Shannon Jackson, Andrew Cyrille). Over the years SchlagArt has gone from a way of investigation and understanding percussion music to a deeper compositional practice, into a way of living percussivness. Also, the collaboration with composers has been a major concern along his path, he has premiered many new works for solo drum set-percussion composed specially for him since 1998.

He ́s been active for more than two decades as an educator, leading workshops independently, in private schools and universities. While living in Chiapas from 2009-2015, he did create Audiosferas: del juego creativo con el sonido, a pedagogic-didactic system for creative experimental music and instant composition, a program developed ideally for kids and experienced with indigenous kids in the community fields for three years. In 2004 he started his drum workshop TAMBORERO LAB, a specialized drum set chamber music ensemble with pedagogical purposes; from 2005 to 2010, the workshop developed more than ten hours of music repertoire and didactic materials. This percussion laboratory is now working in its 2017 edition in Mexico City.