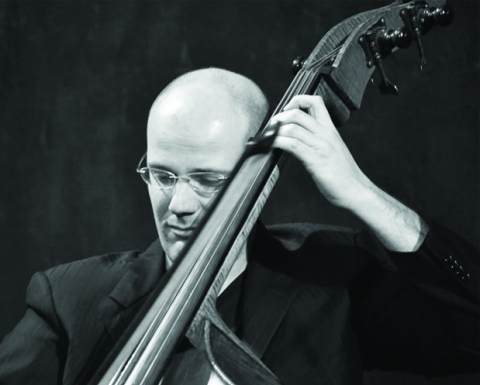 After a degree in double bass, Fabio dedicates his attention to modern, jazz and African music. After the important years spent following the contemporary jazz courses given by brilliant saxophonist and composer Biagio Coppa and double bass maestro Giovanni Tommaso, Fabio deepens the practice of modern double bass playing under the guide of Ubaldo Fioravanti at the Scuola di Alto Perfezionamento di Portogruaro and studying with David Friesen. He’s got the chance to develop his bow style thanks to internationally acclaimed teachers such as Ermanno Ferrari and Enrico Fagone.

While participating to master-classes by Matt Maneri and working as session man in recording studios, Fabio writes and arranges for many jazz combos. In the first years of 2000 he plays with Simon Mariani jazz trio and he’s a founder and arranger of Masabo trio. Since 2003 he collaborates with cultural association Macromusica, devoted to musical promotion and research, as arranger and composer. Fabio’s artistic attitude furthers to compose for contemporary dance performances and theatre plays.

In 2005, after succeeding a hard selection, Fabio starts to work with the famous orchestra “Cherubini” under the conduction of Maestro Riccardo Muti, getting the chance to play in the most important European theatres (Mariinsky in Saint Petersburg, Stanislaskij in Moscow, Grosses Festspielehaus in Salzsburg, Musikverein in Wien a.o.) and playing under the baton of Rudolf Barshai, Yuri Termikanov, Wayne Marshall, both in symphonic and opera repertoire. He also played with internationally acclaimed soloist such as Leonidas Kavakos, Alexander Lonquich and Vadim Repim.

Due to his inexhaustible interest in contemporary and improvised music, Fabio is often involved in projects with musicians of the European and American new music scene as: Gianni Mimmo, Harri Sjöström, Alison Blunt, Angelo Contini, Benedict Taylor, Mario Mariotti, Lisa Mezzacappa, Ove Volquartz, Gianni Lenoci, Vinny Golia among the others. Fabio is also very interested in the study of African music from the Malinke tradition and plays the djembe drum.